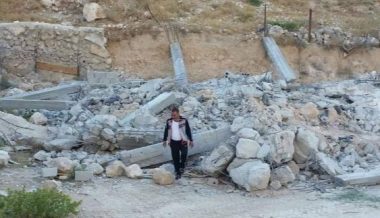 ‘Oqeil and his family (four family members) started the construction of their property nearly three months ago, to provide shelter for themselves.

Silwanic added that the soldiers also poured concrete on the demolished property to prevent any reconstruction.

The WAFA Palestinian News Agency said dozens of soldiers surrounded the area before demolishing the home of Amer ‘Oweisat, allegedly for being built without a construction permit.

‘Oweisat said that the soldiers invaded the area, approximately at 4:30 at dawn, and demolished his newly constructed permit without a warning, or an official demolition order.

He added that his demolished property was only 100 square/meters, and that he recently built and was ready to move into it with his wife and three children.

The demolished property was built with bricks, and included three rooms, in addition to bathrooms and a kitchen,

The soldiers also demolished a 120 square/meter home, that was also recently constructed by Abu Sakran family for their son, Dergham, who is scheduled to be released from an Israeli detention center in the coming few days.

Local sources said the soldiers surrounded the neighborhood and declared the entire area a closed military zone, before invading the property and demolishing it.

The sources added that the home belongs to resident Mohammad Daoud Salem ‘Oweisat. The Israeli authorities claim the demolished property was built without a construction permit.