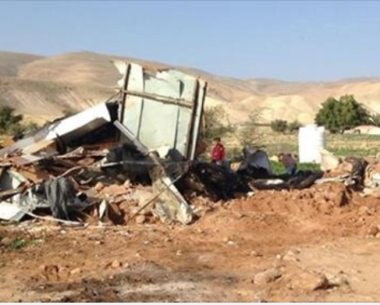 The soldiers surrounded the small community before invading it, and demolished a residential shed, owned by Abdul-Hadi Obeyyat, allegedly for being built without a permit.

The owner said that he received the demolition order four months ago, before he hired a lawyer, but the soldiers demolished the 30 square/meter shed, although the case is still in Israeli courts.

The Palestinian and his family were rendered homes as a result of the demolition.

In related news, the soldiers closed the main entrance of Azzoun town, east of the northern West Bank city of Qalqilia, by closing the iron gate of the illegal Annexation Wall and prevented the Palestinians from entering or leaving it.

It is worth mentioning that Azzoun is surrounded by the illegal Annexation Wall, five iron gates, surveillance cameras, roadblocks and six colonies.