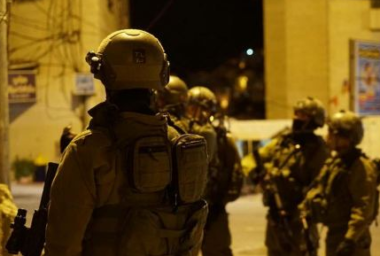 Israeli soldiers shot, on Wednesday at dawn, two young Palestinian men, including one who was shot with an expanding bullet, and abducted four others, in the northern West Bank governorate of Jenin.

They added that the soldiers shot Ali Qassem Sadaqa with an expanding bullet in his leg, causing moderate-to-serious injuries, and Abdullah Kamal Barahma with a rubber-coated steel bullet.

Medics rushed the two wounded Palestinians to a hospital in Jenin and provided the needed first aid to several others who suffered the effects of teargas inhalation.

In addition, the soldiers abducted Amara Fashafsha, Morad Malaysha and Ala’ Khaliliyya, from Jaba’ town southwest of Jenin, and As’ad Mohammad Steiti, from Jenin refugee camp, after stopping them at two sudden military roadblocks on the Jenin-Nablus road.

The soldiers also invaded Jenin city, in addition to the villages and towns of Ejja, Zababda, Siris and Aaba, and drove around their neighborhood and alleys for a few hours, before withdrawing.

In Jenin refugee camp, the soldiers searched the home of Bassam Sa’adi, and interrogated him along with his family while conducting extensive and violent searches of their home.

In related news, the soldiers abducted six Palestinians, including three children, in Jerusalem and Bethlehem governorates, in the occupied West Bank, after the army invaded many homes and violently searched them.