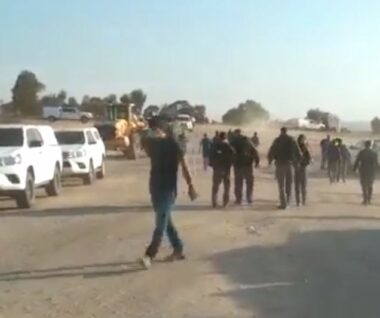 Israeli soldiers and police officers, accompanied by several bulldozers, invaded the al-‘Arakib Bedouin village in the Negev, and demolished it for the 179th time, in addition to abducting a young man.

Aziz Siyah at-Touri, a resident of the unrecognized village, said the soldiers and officers invaded the community and demolished its tents and structures.

He added that the soldiers also abducted his son, Sa’id, and took him to an interrogation facility.

It is worth mentioning that the village was demolished 179 times since the year 2000, including when it was demolished last time on September 17th, 2020.

The villagers remain determined to stay on their lands, and constantly rebuild the demolished structures, usually using wood and strong plastic, seeking shelter from the desert heat and other climate conditions.

These “unrecognized” villages were established in the Negev soon after the 1948 war, following the creation of the state of Israel in the historic land of Palestine, when an estimated 750,000 Palestinians were forcibly expelled from their homes and made refugees.