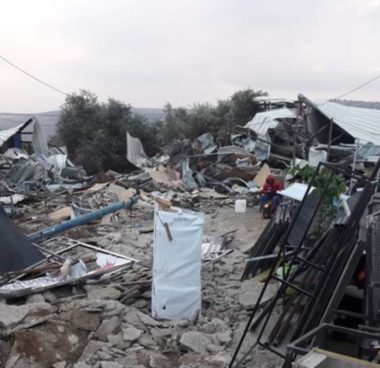 Resident Mohammad Suleiman said dozens of soldiers invaded the village at dawn, before using their armored military bulldozers in demolishing the five commercial structures, owned by his brothers.

He added that the demolished structures are owned by his brothers Fadi, Nadi and Saleh Suleiman, and that the army claimed they were built without a permit from the Israeli Civil Administration Office, as they are located in Area C, under full Israeli control, in the occupied West Bank.

The demolished structures were an agricultural hothouse, a laundromat, a carpentry, a blacksmith and aluminum workshops.

Mohammad added that Israel issued the demolition orders just a week ago, informing his brothers that they “have one month to file appeals,” however, the soldiers demolished the properties within seven days.