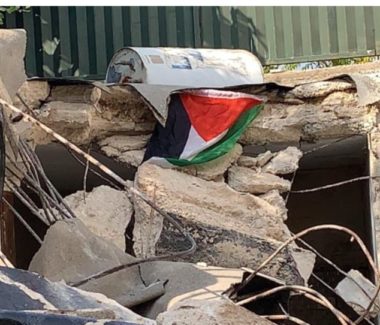 Israeli soldiers and police officers demolished, Tuesday, a Palestinian home, along with commercial structures, and barns, in occupied East Jerusalem.

The Wadi Hilweh Information Center in Silwan (Silwanic) said dozens of soldiers, and officers, invaded the Suwwana neighborhood in Jerusalem, and surrounding a home, owned by Khaled al-Fahham.

Silwanic added that the soldiers proceeded to demolish the property, although the Palestinian managed to obtain a court order delaying the destruction of his property for one week, as his appeal case is still unresolved.

The family stated that the City Council in occupied Jerusalem issued a demolition order against their property nearly 18 months ago, after alleging that it was built without a permit.

The family denied the Israeli allegation, and said that their home was built in 1964, before Israel occupied East Jerusalem in 1967, and that they own all needed permits and documents, however, the Central Court recently decided that the property must be demolished by October 27th.

“We then headed to the High Court and managed to obtain a ruling delaying the demolition for one week,” the family added, “Our appeal was approved, but the City Council went ahead and demolished our home anyway.”

It is worth mentioning that six family members, including three children, lived in the demolished property.

The soldiers also invaded the al-‘Isawiya town, in Jerusalem, and forced one Palestinian, identified as Luay Obeid, to demolish his under-construction home, after threatening excessively high fines and fees.

In addition, the soldiers demolished a stable for horses, a metal shed, and the foundation of a building, owned by Ishaq Hamdan.

A commercial structure owned by Luay Mansour was also demolished in the town. The building contained an office for a car rental service and a carwash facility.