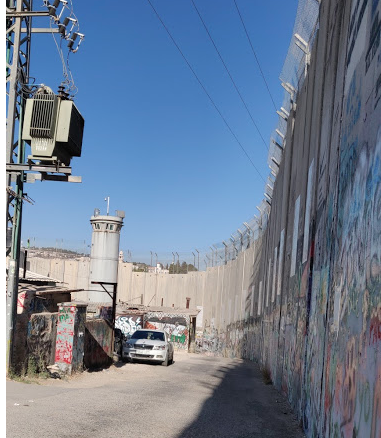 There are no words to describe the bleak reality of actual humans who are trapped and whose lives are scarred by loss, oppression, and uncertainty. And, yet, cling to hope against all odds.

I am not writing about the Israeli-Palestinian conflict. If anything, I am acutely aware of my incompetence, in this regard. All I seek to do is recount my personal experience against the backdrop of the conflict, and my pain at the treatment of Palestinian civilians, by the State of Israel.

On a hot Saturday, as Israel observed the Shabbat, we headed to a Bedouin village in the Negev desert.

What struck us instantly was the hospitality and warmth of the Bedouins. Their homes had been demolished a few days ago, but their spirit was not broken. Under a makeshift arrangement, women chatted and cooked a meal. The children were all smiles as they greeted us and shook our hands eagerly, before darting off to play and find some shade from the scorching sun. We sat under a tree and were served coffee, followed by tea.

The is one of the many “unrecognized” Palestinian villages constantly targeted for demolition. The Israeli authorities claim that the land is state property. The Bedouins have ownership registered under the Ottoman rule and the British Mandate. The State of Israel does not recognize their title deeds.

Over the years, the village of Al-Araqeeb has been subject to frequent demolitions. When we met them, we were informed that over the past 60 days, their houses were broken down 25 times. And, in the latest hearing, the Israeli judge openly directed and aided the prosecution, when it came to utilizing aspects of the law against the Bedouins.

(For background, read about the Jewish National Fund’s reforestation of the land and the plan to “Judaise” the Negev.)

The leader, Sheikh Sayyah Al-Turi, has been the focal point of the Bedouins’ non-violent struggle against the land-grab. He has been arrested numerous times and has around 50 court cases slapped on him by the State of Israel. The attack on him is systematic and consistent — physically, emotionally, financially.

A polite, but imposing personality, he exuded no hatred. Just the steely determination to keep fighting, however hopelessly, against the might and power of the state.

Someone asked him, “Where do you get your strength from?” He very matter-of-factly responded, “This is my land. This is my home. It protected and fed my ancestors, and my family. I must fight for it.”

As we got up to go, a lady told him, “You shall be in my prayers.” He smiled gratefully and responded, “In your prayers, also remember people all over the world who are suffering injustice, that God will strengthen and comfort them.”

When we met Mr A, his first words were, “Welcome to the world’s classiest prison.” Though he was jovial guy and sported a big grin, I found it hard to even smile. The Separation Wall and watchtower in Bethlehem loomed menacingly; Banksy graffiti providing little relief.

He told us how once upon a time he and his friends used to hang out at pizza joints and coffee shops, and drive around, listening to music. But, those days are gone. To feel good, some people may buy a car. But, others see it as a waste of money because “there is nowhere to go.”

We asked him why he does not venture “out of the prison” more often. “You cannot imagine how it feels to get interrogated like a criminal every single time,” he burst out in frustration. His answer made us realize how insensitive and clueless we were to the everyday experiences of Palestinians.

For Palestinians to enter Israel, they have to pass through checkpoints. Over there, the contents of bags are examined and scanned. They could be asked to remove their belts. Their documents are scrutinized. They have to explain the reason they want to get to the “other side.” There are 42 types of exit permits (eg: college, medical treatment, day-time jobs such as construction work in Israel, pray at a holy site, attend a function or a funeral, visit relatives) for which they have to pay for.

At any given point in time, there could be hundreds or even over a thousand waiting to cross over. Once cleared, they have to wait for organized transportation on the other side. This could take up considerable time, and their eventual passage rests on the discretion of the young military officers manning the checkpoint, laden with combat gear and ammunition.

At times, the checkpoint could shut down and no one is permitted to leave.

It is humiliating and dehumanizing.

During a conversation, he pointed to the rooftops which had water tanks. “For every 250 litres of water an Israeli household gets, the Palestinian equivalent will be around 48 litres.”

“They make it so bad that they hope we will leave. But I have nowhere else to go. This is my home.”

We pass by a group of kids playing. They give us the sweetest smiles and enthusiastically wave hello. We go to click a photograph and a few of them shout with alarm, “No, no. Don’t take photo.” A lady with us blew them a flying kiss, with pure innocence they grin and return the gesture.

I remember reading that Hebron is like a movie set with no actors. Yet, nothing prepared us for reality.

Israel has implemented a strict segregationist policy in Hebron, and the Palestinians residing here are extremely marginalised. The settlers deliberately pick fights with them, and this gives the police the legitimate right to come knocking on their doors, in the night, and drag them out.

We met the owner of a shop who told us that his store has been attacked and ransacked on several occasions, over the past years, and the wares sometimes destroyed.

Another man showed us the bullet scar on his leg.

We had lunch in Mr M’s house. He lives there with his entire family. He told us that he has been beaten black and blue on numerous occasions, by the police.

At one time, an Israeli settler put a gun to his head. When he lodged a complaint with the Israeli police, they asked him for the name of the aggressor. Despite seeing the incident captured on military camera installations, the police registered the case against an “anonymous” attacker, since Mr M could not produce the full name. The next day, in the street, the settler grinned and made a gesture at him.

Every time the sound of bullets is heard, he tells his children that they are wedding celebrations. He instructs them to greet the military and police with a “Shalom.” As long as he can, he wants to protect his children from harsh realities and not instill fear in them.

In the market, there is a small stretch with shops owned and run by Palestinians. Israeli settlers have moved into houses above the bazaar and toss garbage, eggs, dirty water, used diapers, and sometimes pour urine, onto the street below. As a result, the shopkeepers have had to put up sheets of corrugated iron. In no time, the Israeli authorities got them dismantled and prohibited such coverings. Hence, a wire mesh to prevent the “big” trash from falling in front of their shops has to suffice.

The harassment of the Palestinians is done with the sole aim of getting them to flee in frustration and replacing them with more settlers.

It is impossible to not leave Hebron with a heavy heart.

The Palestinians could be Druze, Christians, Muslims, or Bedouins. But, they are human, like you and me. They are faced with tumultuous circumstances and very real threats which are ugly, stressful, and often violent.

Children are not spared either. Bedouin children have been thrashed by settlers, on the way to school. Due to international pressure, the military was forced to accompany the children, to prevent physical abuse.

Yet, while they bear witness to the loss of life, shelter, protection, and possessions — they have not lost hope. They fervently pray and wish for a better tomorrow. If not for themselves, at least for their children.

They never asked us for money.

They never asked us for clothes.

They never asked us for food.

They never asked for charity.

All they asked was that we tell their story.