Army Abducts Eight Palestinians In Silwan, One In Al-‘Isawiya, In Jerusalem 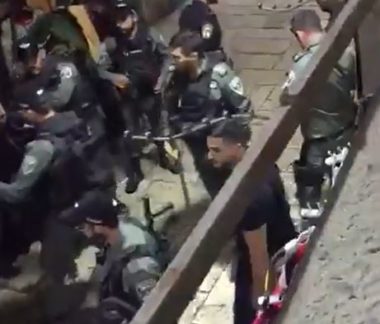 Israeli soldiers abducted, late on Tuesday evening, eight Palestinians, including one child, in the al-‘Isawiya town, and one in Silwan, in occupied East Jerusalem.

Silwanic added that the soldiers also invaded and ransacked many stores, causing damage, before forcing many shops to close, and abducted the owners.

All the abducted Palestinians were as assaulted by the soldiers and suffered cuts and bruises.
In addition, the soldiers abducted a child, identified as Abdullah Da’na, while standing in front his home in al-‘Isawiya.

Furthermore, a young man, identified as Ahmad Ala Sweidan, 20, was abducted from his home in Silwan.
In addition, the Israeli police released one of the civilian guards of the al-Aqsa Mosque, who was abducted earlier in the day.

The guard, Ehab Abu Ghazala, was taken prisoner for filming large groups of soldiers and colonialist settlers who stormed the courtyards of the holy site and conducted provocative tours in Bab ar-Rahma Mosque in Al-Aqsa Compound.

In related news, the army issued orders preventing Ramzi Obeisan from entering the Al-Aqsa Mosque for two weeks, after summoning him for interrogation, Monday.

The Palestinian was initially abducted on the first day of Al-Adha Muslim feast this past August, after the police assaulted him, causing fractures in his foot, when they accompanied dozens of illegal colonists in a provocative tour into the holy site’s compound.