Report: BDS the “Most Dangerous” Movement for Israeli National Security 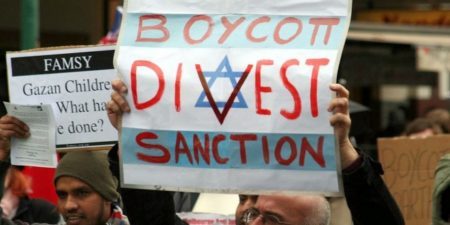 by Mahm’d Zaban, PNN: The Israeli occupation state views BDS as a movement which forms a strategic threat to its national security, extensively triggering international public opinion against it, and works to isolate Israel internationally. Thus, Israel uses several means to reduce the effects of BDS, including the policies of extreme right-wing organizations in America.

The Hebrew publication, Yediot Aharonot, quoted senior political forums in Tel Aviv as saying, “Israel is financing some International organizations to encounter the BDS, and to organize events and activities for the benefit of Israel, especially in the EU states through launching media campaigns on the social networks.”

At their joint position in Brussels, last September, the Israeli Minister of Strategic Affairs and Internal Security, Gilad Erdan, the US special envoy to monitor and encounter anti-Semitism, Ilan Carr, head of the EU-Jewish Council, Rabbi, Menachem Margolin, all urged the EU to take serious steps against any organization which supports BDS, claiming that its activities are racist.

In its bi-weekly report on boycott affairs, the National Bureau for Defending the Land and Resisting Settlement, said that the international boycott campaigns, especially in the EU countries, won’t stop, but step up, despite the Israeli Government, the Zionist lobby and the extreme right-wing parties in the EU countries , as they attempt to criminalize, prosecute, and enact legislation to punish supporters, trying to stop their expansion — especially within BDS — but in vain.

In Johannesburg, at the Synod Church Council that is held every 3 years, and representing Anglican societies in South Africa, Namibia, Lesotho, Swaziland, Mozambique, Angola, and St. Helena, the high commission at the Anglican Church for South Africa (ACSA) unanimously took a resolution to support the BDS campaign against Israel until it ends its military occupation in Palestine. It is worth mentioning that the resolution stated: “The situation in the Holy Land requires the attention of the church, being the place where he (Jesus) was born and crucified.”

Hundreds of authors, recently, have publicly denounced the revocation of a German literary prize, the Nelly Sachs Award for Literature, from esteemed British-Pakistani writer Kamila Shamsie,  because of her support for her support for the movement to boycott the occupation. Moreover, Aachen City authorities have decided to deprive Lebanese artist Walid Ra’d from the literary prize, which values at US $ 9,900, as he is also pro-BDS. Also noteworthy is the fact that Aachen has chosen Ra’d to win the prize for his project “Atlas Group,” which dealt with the history of the civil war in Lebanon, which lasted from 1989 to 2004.

Additionally, the BDS movement has called on Indian artists to boycott a festival to be held in Israel, this month, in order to promote the Israeli occupation. The movement requested and expected that the Bollywood stars won’t join such event, which supports apartheid, noting that the list of guests include Indian artists, most notably Anil Kapoor, Ravina Tandon and Amisha Pateel.

In Germany, the Palestinian Society, supported by other Palestinian unions in the EU — such as the German-Palestinian Society, and the German-Palestinian Women’s Association — managed to win a case filed against BDS by the Municipality Council, which criminalizes and prohibits its activities. It should be noted that the Society has recruited a number of rights organizations, especially the Netherland Transparent Democratic Organization that is host to international Lawyer Giovanni Massimo, to follow up on the matter, which targets German and Palestinian activists, in addition to countering the German Parliament’s resolution, which criminalizes BDS.

In the United States, the largest financial supporter of Israeli settlement movements, and the Israeli lobby in Washington, billionaire casino magnate Sheldon Adelson, has founded a new Jewish-American group called the “Maccabi Labor Commission,” to fight BDS at American and other universities, especially in the EU, where the movement is becoming increasingly active, adding that the group is going to begin working at the beginning of the academic year, in 2020. Furthermore, the Jewish lobby is pressing to enact new laws in the US which would ban criticism of Israel and its occupation of the Palestinian territories, at university campuses.

However, BDS confirms that the number of colleges which support the movement in North America has reached 51, stressing the importance of the students’ activity against the Israeli occupation, and praised the American “Trail Blazers” basketball team’s refusal to sponsor the “Leopold and Sniffens Co.,” which provides the Israeli occupation army with military supplies.

On the Arab level, the Palestinian National Committee for Boycotting Israel (BDS) condemned Qatar‘s recent acts of normalization with the apartheid colonial system, specifically the Israeli occupation, as it hosts  official Israeli sports teams in its sports tournaments, most recently the World Beach Sports Championship, in which an Israeli delegation of 4 players participated, preceded by another Israeli delegation that participated in the World Athletics Championships, held in Qatar. Moreover, Bahraini and Arab organizations and institutions poised against Israel condemned delegation’s participation in a conference, held in Bahrain, to protect navigation in the Gulf.

The Palestinian National Committee for Boycotting Israel – Palestinian BDS, international leadership of BDS, the Moroccan Boycott Movement – Morocco BDS, the Moroccan Coalition of Human Rights, and Coordinating Maghreb Human Rights Organizations also condemned the targeting and harassment of human rights activists in Morocco, by its use of Israeli espionage technology.

On the Israeli level, Interior Minister Aryeh Deri threatened to to prevent Omar Barghouti from staying in Israel, accusing him of doing his best to harm Israel, and therefore should not have the right to stay in Acre with his two sons, as he is one of the founders of the BDS movement. Adding that Barghouti was recently barred from entering Britain and the United States, where he was supposed to participate in conferences, due to the Israeli incitement against him. Moreover, Barghouti was prevented from joining his daughter’s wedding ceremony, in Washington, some months ago.

Hebrew press, including Yediot Aharonot, has also revealed that senior political sources in Tel Aviv claim that Israel is providing financial assistance to international right-wing organizations operating against the BDS movement, through the Ministry of Strategic Affairs, which provided NIS 5.7 million to organize activities in favor of Israel, with extensive campaigns implemented via social media.  NIS 3,000,000 will reportedly be granted, by Israel, to organize pro-Israel field activities, as well as NIS 2.7 million, which will be provided to organizations and activists on social media networks, to organize campaigns against the de-legitimization of Israel, and the boycott movement in the countries, where BDS is active.