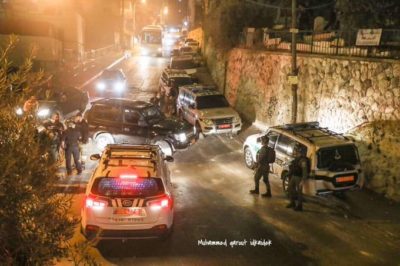 Israeli forces on Thursday evening invaded the town of al-Isawiya in East Jerusalem, desecrated a mosque, and fired tear gas at Palestinian residents of the town.

Local sources told WAFA that a number of heavily armed Israeli soldiers had desecrated their shoes at the Al-Arba’een mosque in the middle of Issawiya, under the pretext of “searching for children.”

Israeli occupation forces arrest the Palestinian child Muhab Mustafa, 8-year-old from the village of Al-Issawiya in the occupied #Jerusalem, this evening pic.twitter.com/YitoSg9Xw2

In addition, Israeli troops installed a roadblock near a home of a deceased Palestinian and started searching cars and interrogating residents

al-Isawiya is one of the towns subjected to a continuous campaign of harassment and abductions of Palestinian residents, as it has been designated as an area for Jewish colonization.

This policy of harassment was recently revealed by a tape leaked from the Israeli police in Jerusalem in which the officers admitted that they harass residents of al-Isawiya for no reason, simply to cause problems for the residents.

Video showing the invasion of the mosque:

From Wednesday’s invasion of al-Isawiya :