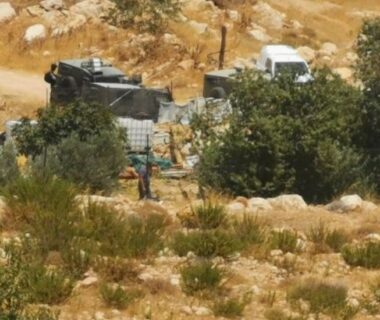 He added that the soldiers also uprooted more than twenty olive trees from orchards that Hilal Rawajba and Wahib Abu Aisha owned.

In related news, the soldiers abducted Mo’taz Rajabi from the Batn al-Hawa neighborhood in Silwan, in occupied Jerusalem.

Mo’taz is a former political prisoner whom Israel imprisoned for ten months before he was released on April 11, 2022.

On Wednesday at dawn, Israeli soldiers abducted at least thirteen Palestinians, including four siblings, from several parts of the occupied West Bank.

Also, two Palestinian and one Israeli soldier were killed during an exchange of gunfire near the village of Jalama, north of Jenin, in the northern part of the occupied West Bank.