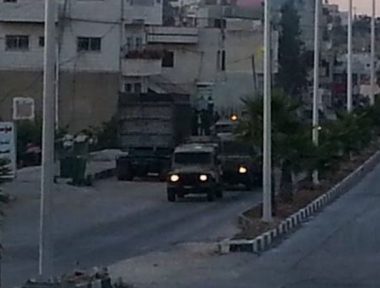 Several Israeli military vehicles invaded, on Friday at dawn, the town of Azzoun, east of the northern West Bank city of Qalqilia, detained fifteen Palestinians, and caused damage to homes while violently searching them.

Media sources in Qalqilia said the soldiers surrounded the town, during early dawn hours, before invading it and breaking into dozens of homes.

The soldiers initiated violent searches of the invaded homes, and destroyed the floors of some of them.

The army detained at least fifteen young Palestinian men, and interrogated them while inspecting their ID cards.