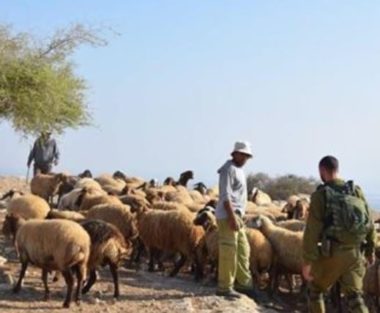 Israeli soldiers detained, Saturday, four Palestinians shepherds, in the al-Farisiyya area, in the West Bank’s Northern Plains, after illegal colonialist settlers assaulted them, and tried to force them out of the area.

Fuqaha added that the shepherds were also accompanied by two Israeli activists of Peace Now Movement, when the illegal colonialist settlers chased them before the soldiers came to the area and detained the shepherds instead of removing the assailing colonists.

It is worth mentioning that the Palestinians in that area are subject to ongoing assaults and violations by illegal colonists, squatting on Palestinian lands under the protection of the Israeli army.