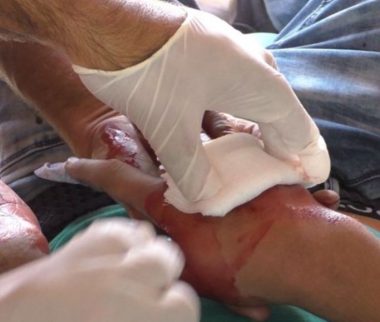 Israeli soldiers attacked, Friday, the weekly procession in Kufur Qaddoum town, east of the northern West Bank city of Qalqilia, and moderately injured a teenage boy with a rubber-coated steel bullet. The army also fired dozens of gas bombs and concussion grenades, and invaded many homes.

Morad Eshteiwy, the media coordinator of the Popular Committee against the Israeli Annexation Wall and Colonies in Kufur Qaddoum, said the soldiers shot Sobhi Abu Dayya, 17, with a rubber-coated steel bullet in his right arm.

He added that the child was rushed to Rafidia governmental hospital in a moderate condition, due to excessive bleeding.

Dozens of Palestinians also suffered the severe effects of teargas inhalation, especially since the soldiers fired many gas bombs at homes in the town.

Furthermore, the soldiers invaded and ransacked many homes in the town, and occupied their rooftops.

Also on Friday, the soldiers attacked the weekly nonviolent protest against the Annexation Wall and colonies, in Ni’lin village, west of Ramallah, in central West Bank.