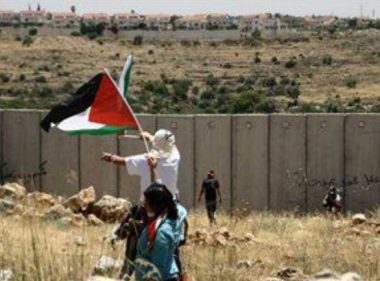 The procession was held by many Palestinians, accompanied by Israeli and international peace activists, who marched from the center of the village, carrying Palestinian flags, and chanting against the occupation, for the liberation of Palestine, and the release of all political prisoners.

Mohammad Amira, the coordinator of the Popular Committee in Ni’lin, said the soldiers fired many concussion grenades and gas bombs at the nonviolent protesters as they approached the Wall, separating the villagers from their lands.

Amira added that the soldiers used surveillance drones to monitor the protesters, and that the procession also commemorated the sixteenth anniversary of the death of Jamal Mohammad Nafe’, who was killed by Israeli army fire in a Palestinian olive orchard, in Ni’lin, on June 20, 2001.