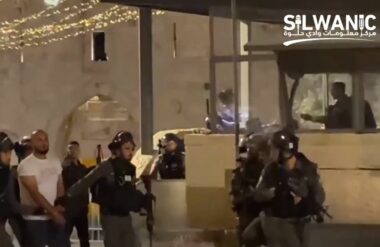 Update: At least twenty Palestinians have been injured by Israeli rubber-coated steel bullets, and many others were wounded after being assaulted by the soldiers, on Friday at night, in and around the Old City of occupied Jerusalem.

Palestinian Red Crescent Medics moved many of the wounded to several Palestinian hospitals and clinics in Jerusalem.

In ongoing Israeli escalation against the Palestinians in the occupied Palestinian capital, Jerusalem, the soldiers shot at least eleven Palestinians with rubber-coated steel bullets and caused dozens to suffer the severe effects of teargas inhalation in yet another invasion into the at-Tour town, and the Old City, on Friday at night.

Media sources said the soldiers shot three Palestinians with rubber-coated steel bullets near the main junction of at-Tour town, in addition to firing a barrage of gas bombs and concussion grenades, causing dozens to suffer the effects of tear gas inhalation, cuts, and bruises.

The sources added that the soldiers also used trucks to spray the Palestinians with wastewater mixed with chemicals.

Also, the soldiers invaded the al-‘Isawiya town, in Jerusalem, and fired a barrage of gas bombs in addition to concussion grenades.

In the Old City of occupied Jerusalem, the soldiers shot eight Palestinians with rubber-coated steel bullets, and abducted another, after the army prevented hundreds of residents from reaching the Al-Aqsa Mosque, in addition to closing various streets and alleys in the Old City. 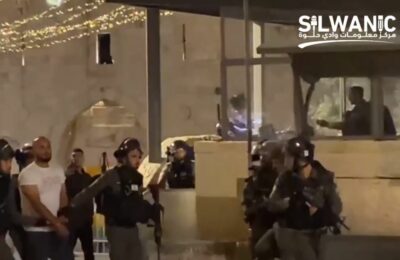 Mounted police officers and soldiers also assaulted many Palestinians in Salahuddin Street and Bab al-Amoud, and hurled concussion grenades at them.

The soldiers also abducted a young man, identified as Ahmad Natsha in Bab al-‘Amoud, and took him to a nearby police station.