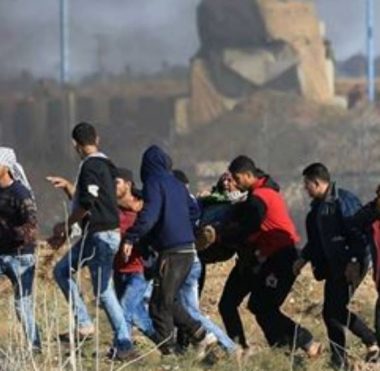 Israeli soldiers shot, Friday, eight young Palestinian men, including one who suffered a serious injury, after the army attacked protesters along the border fence, in several parts of the besieged coastal region.

Spokesperson of the Palestinian Health Ministry in Gaza, Dr. Ashraf al-Qedra, said the soldiers shot a young man, 18 years of age, with a live round in the face, north of Beit Hanoun, in northern Gaza.

He added that the young man was rushed to Beit Hanoun hospital, and was later moved to the Indonesian hospital, in Jabalia, in northern Gaza, due to the seriousness of his condition.

Dr. Al-Qedra also said that another young man was shot in the face, near Nahal Oz military base across the border fence, east of the Sheja’eyya neighborhood, east of Gaza city.

Furthermore, the soldiers shot and moderately injured a young man with a live round in the leg, east of Gaza city, before he was rushed to the Shifa medical center.

Another Palestinian, 25, was moderately injured with a live round, east of Khan Younis, in the northern part of the Gaza Strip.

Four more Palestinians were also shot with live rounds in their legs, and suffered moderate wounds, east of al-Boreij, in central Gaza.

Many Palestinians suffered the severe effects of teargas inhalation in several parts of the coastal region and received the needed treatment by local medics.