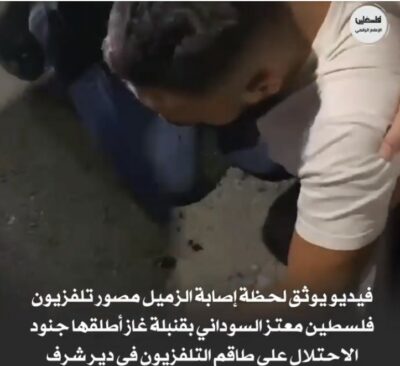 The journalists were filming and reporting for a Palestine TV show, “Today’s File,” near the closed entrance of Deir Sharaf village, northwest of Nablus, when the soldiers started firing gas bombs and concussion grenades, in addition to physically assaulting the journalists.

Palestine TV said the soldiers shot camera operator Mo’taz Sudani with a gas bomb in the face, caused three others to suffer the effects of tear gas inhalation, in addition to assaulting and wounding a fifth journalist.

Palestine TV added that the soldiers also caused damage to cameras and equipment the reporters carried when they were assaulted.