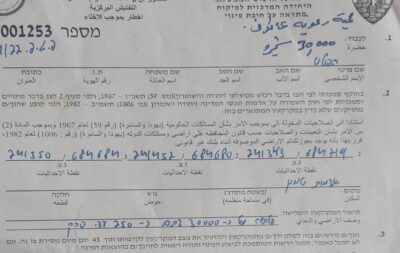 TUBAS, Monday, October 17, 2022 (WAFA) – The Israeli occupation authorities today notified the Municipal Council of Khirbet A‘tuf village, southeast of Tubas, of their intention to uproot tens of thousands of forest trees from the area, according to a local activist.

Mu‘taz Bsharat said that the occupation authorities handed the Municipal Council a notice to remove 30,000 forest trees planted in a 1600-donum pasture reserve.

Head of the Municipal Council, Abdullah Bsharat, said that the trees were planted by the Council and Ministry of Agriculture with funds from international donors, explaining that the military notice to uproot the trees, dated October 6, was found out today in the reserve.

In violation of international law, the Israeli military not only temporarily displaces the communities on a regular basis, but also confiscates their farmlands, demolishes their homes and infrastructure from time to time.