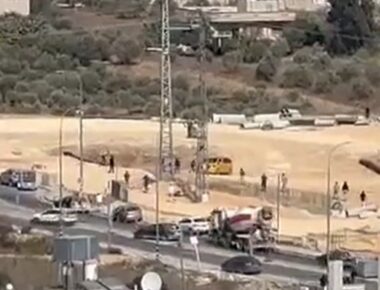 On Thursday, dozens of paramilitary illegal Israeli colonizers invaded Huwwara town, south of the northern West Bank city of Nablus, attacked many Palestinians, and caused damage to 15 shops and twenty cars before Israeli soldiers attacked the Palestinians, wounding many, including a journalist.

Medical sources said the soldiers shot a photojournalist, Majdi Eshteyya, with a gas bomb in the knee and caused many Palestinians to suffer the effects of tear gas inhalation during protests that took place after many paramilitary colonizers invaded the town’s center.

The sources added that the soldiers also fired many gas bombs and concussion grenades at several shops in the town, causing serious damage and several injuries.

Furthermore, the illegal colonizers attacked many shops in the town’s center, causing damage to fifteen shops, in addition to damaging twenty cars parked on the sides of the street.