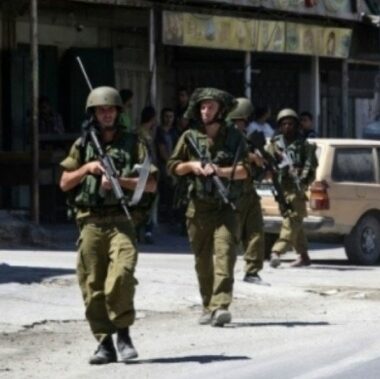 Israeli soldiers invaded, on Thursday evening, Shu’fat refugee camp in occupied East Jerusalem, and injured many Palestinians after firing a barrage of gas bombs at protesters, homes, and cars.

Media sources said several army jeeps invaded the refugee camp, leading to protests, before the soldiers fired a barrage of gas bombs, targeting protesters, homes, and cars in the area.

They added that the soldiers also chased many Palestinians in the refugee camp, and fired many gas bombs at them, in addition to invading buildings and occupying their rooftops to use them as firing posts and monitoring towers.

Dozens of residents suffered the effects of teargas inhalation and received the needed treatment by Palestinian medics.

The soldiers also forced several shops on the main street of the refugee camp to close and forced the residents away.

Earlier Thursday, soldiers abducted two young men, identified as Adam Mustafa and Mos’ab Hussein, from the al-‘Isawiya town in Jerusalem, in addition to repeatedly assaulting Daoud Qteina, in Jerusalem, before abducting him.

In addition, the soldiers abducted Anas Maher Jouda and Mo’taz Nazeeh Badawna, from ‘Aida refugee camp, in addition to Mohammad Awwad, from Jabal al-Mawaleh, in Bethlehem, south of occupied Jerusalem.