Update: Israeli Soldiers Injure Many Palestinians, Including A Child, In Kufur Qaddoum 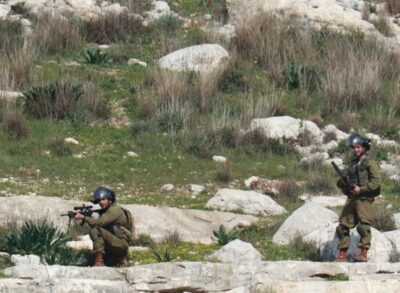 On Friday, Israeli soldiers injured many Palestinians, including a child, during the weekly procession in Kufur Qaddoum town, east of Qalqilia, in the northern part of the occupied West Bank.

Update: The Popular Committee in Kufur Qaddoum said Salim Eshteiwi, who was injured in the shoulder and the knee during the weekly procession, was hospitalized awaiting surgery.

The Committee said Salim was shot with a rubber-coated steel bullet in the shoulder and fell to his knees during the weekly procession.

Morad Eshteiwi, the media spokesperson of the Popular Committee against the Annexation Wall and Colonies in Qalqilia, said the Palestinians marched from the center of the town while chanting against the escalating Israeli violations.

He added that the soldiers fired many live rounds at the protesters, wounding a child, only twelve years of age, in the thigh.

The soldiers also chased a young man, causing him to fall and suffer moderate wounds. The young man and the child have been transferred to a hospital in Qalqilia.

Dozens of Palestinians suffered the effects of tear gas inhalation and received the needed treatment by the medics. In 2003, the Israeli occupation authorities closed the town’s main road to local Palestinians and granted full access to the colonial settlers, especially those living in the illegal Kedumim colony, built on confiscated Palestinian lands.