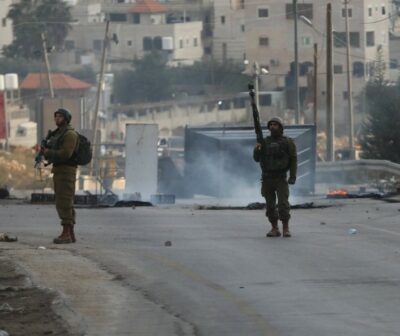 On Friday night, Israeli soldiers invaded the Al-Khader town, south of the West Bank city of Bethlehem, and injured many Palestinians during a procession against the Israeli offensive on Gaza.

Media sources said the Palestinians marched in the at-Tal area in the Old City of Al-Khader while chanting against the Israeli offensive on Gaza and the ongoing Israeli occupation of Palestine.

They added that the soldiers fired many live rounds, gas bombs, and concussion grenades, causing many Palestinians to suffer the effects of tear gas inhalation. It is worth mentioning that the Israeli army killed ten Palestinians, including one child, and injured 6, including five children and four women.