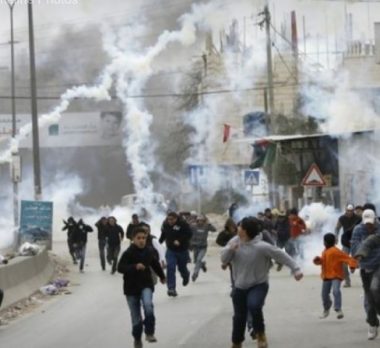 On Tuesday, Israeli soldiers injured many Palestinians, including seven who were shot with live fire, in Beit Ummar town and the Al-Arroub refugee camp, near Hebron, in the southern part of the occupied West Bank.

Several army jeeps invaded Beit Ummar town, north of Hebron, and attacked Palestinians who participated in the funeral ceremony and procession of Mofeed Mohammad Khalil, 44, who was killed when the soldiers shot him with a live round in the head at dawn and injured twenty-one Palestinians.

Eyewitnesses said the soldiers shot seven Palestinians with live fire in the lower extremities, before the medics rushed them to the Al-Ahli hospital in Hebron.

Palestinian medics also provided treatment to twelve Palestinians who the soldiers shot with rubber-coated steel bullets and the dozens who suffered the effects of tear gas inhalation.

The soldiers also closed the main entrance of the Al-Arroub refugee camp, north of Hebron, leading to protests, before the army fired many gas bombs and concussion grenades at the protesters and the surrounding homes, causing many injuries, mainly due to the severe effects of tear gas inhalation.

Furthermore, many Palestinians were injured after a group of illegal Israeli colonizers attacked homes, lands, shepherds and farmers in the Jabal Jales area, and maced the Palestinians, including children, with pepper-spray, and assaulted many others.

Some of the wounded were moved to hospital in Hebron after receiving treatment by Palestinian medics.