Israeli Soldiers Injure Many Palestinians Near Hebron, Abduct One Near Jericho 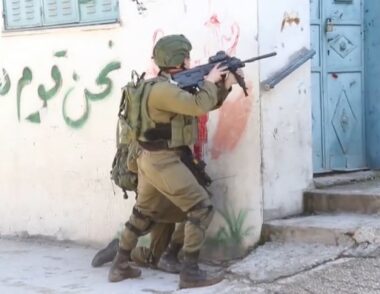 On Tuesday evening, Israeli soldiers injured many Palestinians in Beit Ummar and the Al-Arroub refugee camp in the Hebron governorate, in the southern part of the occupied West Bank. The army also abducted a Palestinian near Jericho.

In Beit Ummar town, north of Hebron, the soldiers invaded the Za’ta area, chased many children playing there, and fired many live rounds, gas bombs, and concussion grenades to force them to leave.

Medical sources said several Palestinians, including some in their homes, suffered the effects of tear gas inhalation.

In the Al-Arroub refugee camp, north of Hebron, the soldiers shot a Palestinian with a rubber-coated steel bullet and caused many to suffer the effects of tear gas inhalation, cuts, and bruises, during protests that took place after the army invaded it.

In related news, the soldiers abducted a Palestinian from Tammoun, southeast of Tubas, in the northeastern West Bank, after stopping him at a military roadblock near Jericho.

Kamal Bani Odah, the head of the Tubas office of the Palestinian Prisoners’ Society (PPS), said the soldiers abducted a former political prisoner and an activist with the Popular Committee against the Annexation Wall and colonies, Ayman Ghrayyeb after stopping him at the Al-Mo’arrajat military roadblock, west of Jericho.