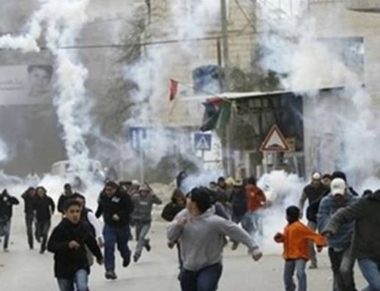 Israeli soldiers fired, Sunday, dozens of gas bombs into several schools, and surrounding areas in Hebron city, in the southern part of the occupied West Bank, causing dozens of schoolchildren and teachers, to suffer the effects of teargas inhalation.

Media sources said dozens of soldiers invaded the southern area of Hebron city, and fired a barrage of gas bombs into several schools, and their surrounding areas.

Dozens of schoolchildren, and several teachers, suffered the effects of teargas inhalation and received the needed medical treatment.

The Israeli army claimed several Palestinians hurled stones at the military vehicles, however, the schools and many homes in southern Hebron, especially around the Ibrahimi Mosque, are subject to constant violations not only by the soldiers, but also by the illegal Israeli colonists who frequently attack the residents, especially the students while heading to school or returning to their homes, in addition to the Palestinian homes and property.

In related news, the soldiers abducted Sari and Yousef al-Akel, from Beit Ola town, while walking in Tal Romedia neighborhood in the center of Hebron city.

Also on Sunday, the soldiers caused dozens of schoolchildren to suffer the severe effects of teargas inhalation in a school in Orif village, south of the northern West Bank city of Nablus.