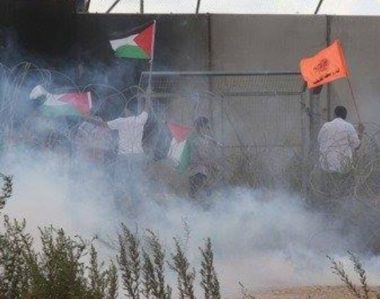 Israeli soldiers attacked, Friday, the weekly nonviolent procession against the illegal Annexation Wall and Colonies in Bil’in village, west of the central West Bank city of Ramallah, causing many protesters to suffer the effects of teargas inhalation.

The nonviolent procession started from the center of the village, directly after noon prayers, before the locals, accompanied by Israeli and international peace activists, marched towards the Annexation Wall, built on the villagers’ lands in Abu Lemon area, south of the village.

The soldiers fired dozens of gas bombs at the nonviolent protesters, causing many to suffer the effects of teargas inhalation.

The protesters this week marched in solidarity with the Palestinian detainees, holding hunger strike in Israeli prisons and detention camps, and calling for ending the escalating Israeli violations against them.

They marched carrying Palestinian flags, and chanting for the release of all detainees, the liberation of Palestine, and for implementing all resolutions regarding the Right of Return of the refugees.