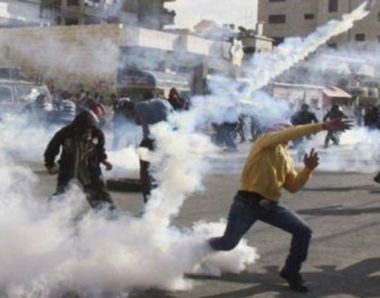 Israeli soldiers injured, Friday, many Palestinians in Bab az-Zawiya area, in the center of Hebron city, in the southern part of the occupied West Bank.

Media sources said the soldiers attacked dozens of Palestinian protesters by firing a barrage of gas bombs and concussion grenades at them.

They added that the soldiers shot a young man with a rubber-coated steel bullet, and caused dozens to suffer the effects of teargas inhalation.

Palestinian photojournalist, Mos’ab Shawar, said the soldiers attacked and clubbed him, in addition to shouting insults at his colleague Mousa al-Qawasmi.

In related news, the soldiers attacked the weekly nonviolent procession against the illegal Annexation Wall and Colonies in Bil’in village, west of the central West Bank city of Ramallah, causing many protesters to suffer the effects of teargas inhalation.