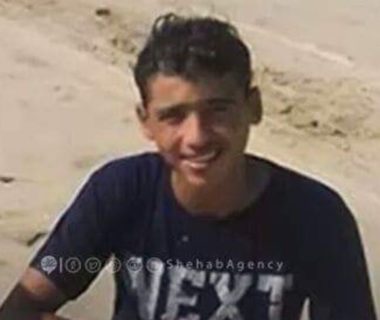 Israeli soldiers attacked, on Friday evening, the weekly Great March Processions in the besieged Gaza Strip, killing one child, and injuring at 55 others, including one who suffered serious wounds, and two medics.

The Palestinian Health Ministry has reported that the soldiers shot a child, identified as Maisara Mousa Ali Abu Shallouf, 15, after shooting him with live fire in the abdomen, east of Jabalia, in the northern part of the Gaza Strip.

The soldiers also fired live rounds and gas bombs at medics trying to reach the child to provide him with the urgently needed medical help, before he succumbed to his wounds.

Dr. Ashraf al-Qedra, the spokesperson of the Health Ministry In Gaza, said the soldiers shot 66 Palestinians, including 15 children and six women, in addition to two medics.

It added that one of the wounded Palestinians suffered life-threatening wounds.

The Health Ministry also stated that the soldiers shot two medics and caused others to suffer the effects of teargas inhalation.

The protests took place in five areas in the eastern parts of the Gaza Strip, from Beit Lahia, Beit Hanoun and Jabalia, in the northern part, to Gaza city and central Gaza, in addition to Khan Younis and Rafah, in the southern part of the coastal region.

Media sources in Gaza said the army used high-velocity gas bombs, and live fire, targeting many areas far away from the perimeter fence.

They added that the soldiers also targeted several ambulances, medics and journalists, with sniper fire, in addition to the high-velocity gas bombs.