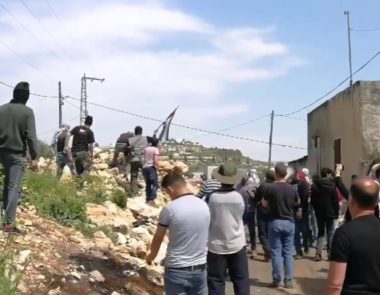 Israeli soldiers attacked, Friday, the weekly protest in Kufur Qaddoum town, east of the northern West Bank city of Qalqilia, wounding one Palestinian and causing dozens to suffer the effects of teargas inhalation.

The Palestinians marched from the center of the village, while chanting for ending the illegal Israeli occupation of Palestine, before the soldiers attacked them life rounds, rubber-coated steel bullets, gas bombs and concussion grenades.

Medical sources said the soldiers shot a young man with a rubber-coated steel bullet in his leg, and caused dozens of Palestinians to suffer the effects of teargas inhalation.

The Palestinians hold processions in Kufur Qaddoum every Friday and Saturday, for the eighth consecutive year, demanding the army to reopen the town’s main road, which was blockaded fifteen years ago, to enable easy access for illegal colonialist settlers driving to and from the Kedumim Israeli colony, built on private Palestinian lands.

Furthermore, the soldiers injured many Palestinians in Bab az-Zawiya area, in the center of Hebron city, in the southern part of the occupied West Bank.

In related news, the soldiers attacked the weekly nonviolent procession against the illegal Annexation Wall and Colonies in Bil’in village, west of the central West Bank city of Ramallah, causing many protesters to suffer the effects of teargas inhalation.