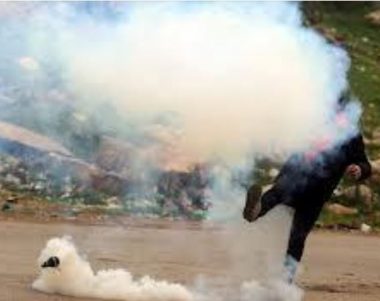 Israeli soldiers invaded, on Friday evening, Wad Shahin area in the West Bank city of Bethlehem, and clashed with many youngsters, before firing gas bombs and concussion grenades at them, causing many Palestinians to suffer the effects of teargas inhalation.

The soldiers fired many gas bombs and concussion grenades at random, some falling in farmlands, causing fire, local sources said.

In addition, the soldiers invaded the home of Bassel Salahat, who was abducted by the army two days ago, and searched the property, in addition to invading the home of Nafeth Rifa’ey and occupying its rooftop for several hours.

The Maan News Agency said that the army invaded Bethlehem looking for a light surveillance drone that apparently crashed in the city, while the military refrained from commenting.