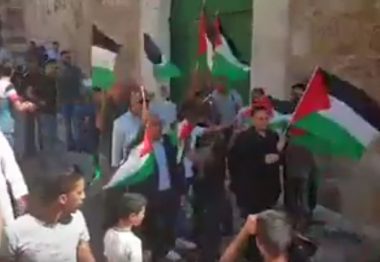 Dozens of Israeli soldiers attacked, Friday, nonviolent Palestinian protesters, marching in the southern West Bank city of Hebron, to protest the escalating Israeli violations against the city, including the Ibrahimi Mosque, and the colonialist activities.

The procession started after noon prayers in the Ibrahimi Mosque, and was called for by the National Campaign to Lift the Closure of Hebron – Dismantle the Ghetto, and various local groups, also condemning the military closure of many roads in Hebron, especially in the Old City, and the increasing number of electronic gates, surrounding the Ibrahimi Mosque.

They also denounced the recent installation of many additional roadblocks and electronic gates, in various parts of the city.

The soldiers, who were heavily deployed in around the Ibrahimi Mosque, resorted to the excessive use of force against the nonviolent protesters.

“We in the National Campaign to Lift the Closure of Hebron – Dismantle the Ghetto, have called for a mass Friday prayer at the Ibrahimi Mosque to protest its closure in the previous Friday, and in response to the influx of settlers to the place and the presentation of the Zionist flag by a projector on the walls of the mosque, where a number of activists raised the Palestinian flag today to confirm the identity of the Place,” Hisham Sharabati the coordinator of Hebron Defense Committee said.

He added that the soldiers attacked the Palestinians, including beating them with their guns, and stated that the soldiers also assaulted a group of activists from The National Campaign to lift the Closures in Hebron, who raised Palestinian flags and chanted against the Israeli decision, granting official status to the illegal colonists.