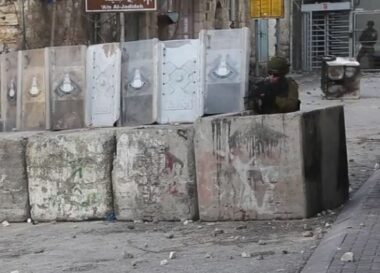 Israeli soldiers injured, Friday, many Palestinians in the center of Hebron city, in the southern part of the occupied West Bank, after the army invaded the area and attacked protesters.

Media sources said the invasion was mainly focused in Bab az-Zawiya area, and added that the soldiers occupied the rooftops of several homes to use them as firing posts and monitoring towers.

The soldiers fired a barrage of gas bombs, concussion grenades, rubber-coated steel bullets, and live rounds at the protesters.

One Palestinian was shot with a live round in his leg before the medics transferred him to Hebron governmental hospital.

Dozens of residents, including children, suffered the effects of teargas inhalation, mostly while in their homes, and received the needed treatment by medics.