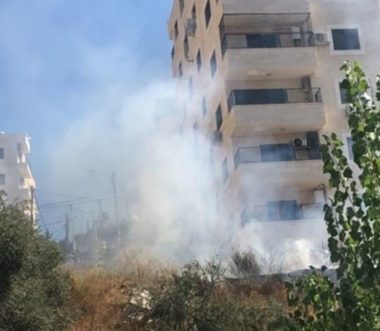 Israeli soldiers injured, on Wednesday before noon, several Palestinians in Batn al-Hawa neighborhood, in the central West Bank city of Ramallah, after invading it and surrounding a residential building.

Media sources said the invasion was carried out by at least twenty military vehicles before the soldiers surrounded the residential building.

They added that the soldiers also invaded the al-Jammal nearby building and installed a sniper post on its rooftop, in addition to breaking into and searching a warehouse used for medical supplies.

The invasion led to protests with many Palestinians who hurled stones at the army vehicles, while the soldiers fired a barrage of gas bombs, concussion grenades, rubber-coated steel bullets, and several live rounds.

The Palestinian Civil Defense said many Palestinians suffered the effects of teargas inhalation, and that a fire broke out due to the intensity of the gas bombs and concussion grenades.

On Wednesday morning, the soldiers invaded Birzeit town, north of Ramallah, and stormed a residence for students of Birzeit University, before abducting three of them.