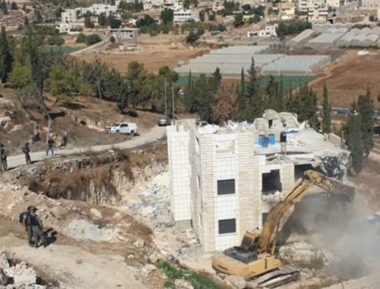 Israeli soldiers demolished, on Wednesday afternoon, an under-construction home in the al-Hijra village, at the southern entrance of Doura city, south of Hebron, in the southern part of the occupied West Bank.

Media sources said several army jeeps and bulldozers, invaded the village and demolished the two-story property of 250 square/meter each floor.

The owner of the demolished property, Samir Nimir Doudin, said the army first issued orders stopping the construction for not receiving a permit from the “Civil Administration Office,” the executive branch of Israel’s illegal military occupation of the West Bank.

Doudin added that he filed an appeal with an Israeli court to halt the demolition and give him enough time to obtain all needed permits, however, the court never made a ruling in the case and the army didn’t wait and went ahead with the demolition.