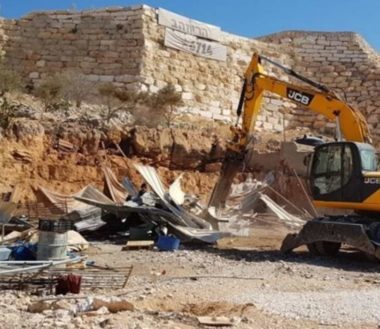 Israeli soldiers demolished, Wednesday, a shed and an agricultural structure in Deir Ballout town, west of the central West Bank city of Salfit.

The soldiers surrounded the entire area before invading it and demolished the two structures without prior notice.

Salfit Governor, Lieutenant Dr. Abdullah Kamil, denounced the ongoing and escalating Israeli violations against the residents in Salfit, including the repeated bulldozing and uprooting of farmlands, and the destruction of property.

He called on various international human rights and legal groups to intervene, and stop the Israeli violations against the Palestinian people, and added that “such crimes requires serious international intervention, especially since the silence and idleness of the international community are encouraging Israel to continue and escalate its crimes.”

It is worth mentioning that the soldiers also demolished an agricultural room, and a water tank, east of Hebron.

In related news, the soldiers demolished an under-construction home in the al-Hijra village, at the southern entrance of Doura city, south of Hebron, in the southern part of the occupied West Bank.