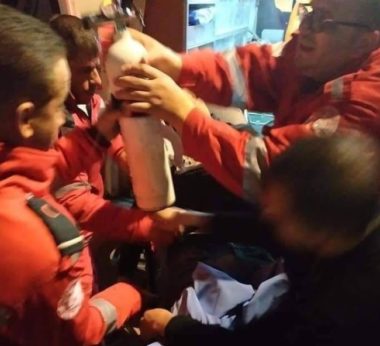 Israeli soldiers chased, on Tuesday evening, many Palestinians in Tammoun town, south of Tubas in northeastern West Bank, and injured some of them.

Media sources in Tubas said the soldiers attacked many Palestinians, who protested the invasion, and fired many gas bombs and concussion grenades at them, in addition to chasing several others.

They added that one Palestinian fell while the soldiers were chasing him, and suffered a fracture in one of his legs.

The soldiers also caused many Palestinians to suffer the effects of teargas inhalation.

Israeli forces, on Monday morning, deployed dozens of  military vehicles near the entrance of Aqaba village, to the east of Tubas.

According to WAFA, the military brought dozens of vehicles to the area, under the pretext of conducting exercises in the region.

It is noteworthy that, the day prior, Israeli forces expelled 14 Palestinian families from their homes in Khirbat Ibiziq village, north of Tubas; to carry out military drills in the area.

Furthermore, on Tuesday, the army invaded and violently searched many homes in Tammoun, and interrogated the families while inspecting their ID cards.

In related news, the soldiers attacked many shop owners at the entrance of the al-‘Arroub refugee camp, north of the southern West Bank city of Hebron.

The soldiers also sprayed homes with waste-water mixed with chemicals and fired live rounds at protesters in the refugee camp.

In the Gaza Strip, the Israeli Navy fired live rounds at fishing boats in Palestinian territorial waters near Rafah, in the southern part of the coastal region.