Israeli Soldiers Abduct Two Palestinians In Hebron, One In Bethlehem 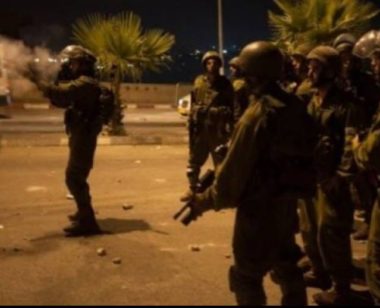 Israeli soldiers abducted, on Tuesday evening, two young Palestinian men from Hebron governorate, in the southern part if the occupied West Bank, and one in Bethlehem, south of occupied Jerusalem,

Media sources in Hebron said the soldiers closed the entrance of the al-Fawwar refugee camp, south of Hebron, installed a sudden military roadblock, before stopping and searching dozens of cars and residents.

They added that the soldiers abducted Mahmoud at-Teety, from the al-Fawwar refugee camp, and Jawad Hdeib, from Doura city, southwest of Hebron, and took them to an unknown destination.

It is worth mentioning that the soldiers also installed a roadblock at the entrance of Halhoul city, north of Hebron, and prevented the Palestinians from entering or leaving it.

In Bethlehem, the soldiers abducted a young man, identified as Saddam Aqel, from Aida refugee camp, north of the city, while returning home from Hebron.

In related news, the army decided to release a Palestinian woman, identified as Khawla Zeitawi, from the village of Jamma’in, southwest of Nablus, in the northern part of the West Bank.

The woman was taken prisoner, Monday, while visiting her imprisoned brother, Abdullah Zeitawi, in the Negev Desert Detention Camp.