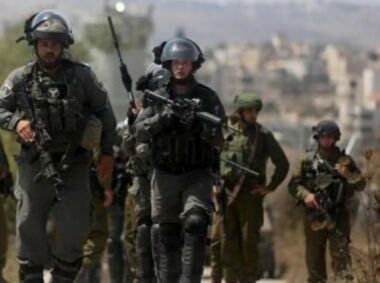 The Palestinians were marching after illegal Israeli colonizers installed an outpost near the military roadblock, on Friday at night.

The soldiers fired many live rounds, rubber-coated steel bullets, and gas bombs at the Palestinians.

The Health Ministry said the soldiers shot a young man with a live round in the back, causing a moderate injury.

It added that the soldiers also shot two Palestinians with rubber-coated steel bullets, causing mild injuries, in addition to causing a few others to suffer the effects of tear gas inhalation.

It is worth mentioning that Israeli colonizers also attacked the Palestinian protesters, in addition to hurling stones at Palestinian cars trying to cross the roadblocks, causing damage.

The outpost which was installed by the colonizers was set up on Palestinian lands near a former Israeli military base that was evacuated several years ago, however, the lands were never returned to the Palestinians especially due to their proximity to the roadblock.