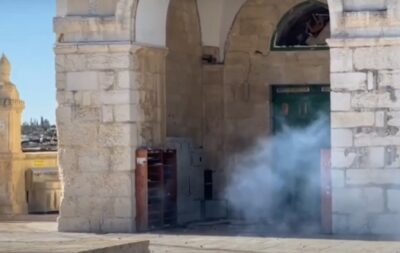 Israeli soldiers injured, Thursday, at least twenty Palestinians as the army continued for the fifth consecutive day its invasions and violations in the courtyards of the Al-Aqsa Mosque, in the occupied capital Jerusalem, in the West Bank.

The Palestinian Red Cresent Society (PRCS) said its medics provided treatment to a Palestinian who was shot with a rubber-coated steel bullet in the face, in addition to at least nineteen who suffered the effects of teargas inhalation in the al-Qibli Mosque in Al-Aqsa, after the army invaded it and forced the Palestinians out to allow groups of illegal colonizers to tour the holy site.

The attacks occurred when dozens of soldiers and police officers stormed Al-Aqsa courtyards, assaulted dozens of Muslim worshipers, and prevented Palestinian medics from entering the area for a few hours.

The soldiers fired many gas bombs, concussion grenades, and rubber-coated steel bullets at the Palestinians to force them out of the Al-Qibli Mosque, Al-Aqsa Mosque, and the Dome of the Rock after surrounding them.

The soldiers also attacked many Palestinian journalists and forced them to leave the holy compound through the Chain Gate.

After the attacks, the army and the police allowed more than 760 Israeli colonizers in several groups to storm the courtyards of the holy compound.

On Wednesday, Israeli soldiers invaded the holy site and injured 21 Palestinians before removing the worshipers and allowing more than 1180 colonizers into the courtyards of Al-Aqsa through the al-Magharba Gate.