Soldiers Abduct Five Palestinians, Including A Child, In Hebron And Jenin 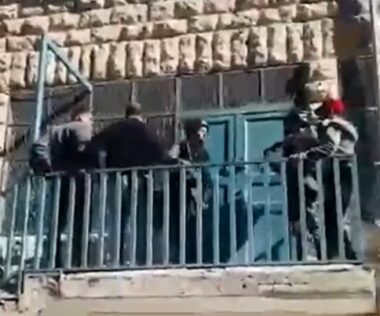 Israeli soldiers abducted, Thursday, four Palestinians, including a child, and injured many others in Hebron, in the southern part of the occupied West Bank, and abducted a young man in Jenin, in the northern West Bank.

The soldiers also abducted Kayed Sa’id Da’na in the Wadi al-Hasseen area in the Old City of Hebron and a schoolchild, Yazan Eid Abu Rmeila, 13, who was taken in front of a school in the southern area of Hebron city.

The army claims Abu Rmeila and other Palestinians hurled stones at them, but the children were walking near their al-Hajiriyya school.

In addition, the soldiers fired many gas bombs and concussion grenades in the schools’ area in the southern part of Hebron city, causing many Palestinians, including schoolchildren, to suffer the effects of tear gas inhalation.

In Jenin, in the northern West Bank, the soldiers invaded Barta’a town, southwest of the city, and abducted a young man, Ahmad Eyad Qabaha, 20.

In addition, the soldiers near the al-Aqsa Mosque injured a man in Hizma town, northeast of occupied Jerusalem on the West Bank.