Israeli Soldiers Injure Two Palestinians In Nablus, One Near Bethlehem 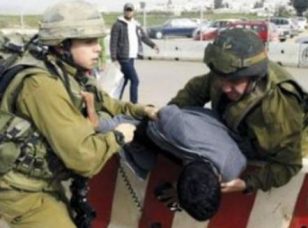 Dozens of Israeli soldiers invaded, on Thursday at dawn, Nablus city in northern West Bank, while accompanying dozens of colonialist settlers into the city, shot two Palestinians and caused many others to suffer the effects of teargas inhalation. The soldiers also assaulted and injured a young man near Bethlehem.

The soldiers also hurled a gas bomb into a car, driven by Amir Na’el Dweikat, 22, wounding him in several parts of his body.

Both Palestinians received the needed treatment by local medics before being rushed to Rafidia governmental hospital.

Many Palestinians suffered the effects of teargas inhalation, and received the needed treatment without the need to be moved to a hospital.

The Palestinians believe that Joseph’s Tomb is the funerary monument to Sheikh Yusef Dweikat, a local religious and social figure. Others believe that the tomb belongs to the Biblical patriarch Joseph, revered by Jews, Samaritans, Christians and Muslims alike, but the site remains off-limits to the Palestinians.

In addition, the soldiers assaulted a Palestinian at the “Container” military roadblock, east of Bethlehem, before he was moved to a Palestinian hospital.

In Jenin, in northern West Bank, the soldiers invaded the home of a political prisoner from Ya’bad town, southwest of the city, identified as Adnan Hamarsha, and violently searched the property while interrogating his family.

The soldiers caused property damage to Hamarsha’s home, before confiscating his car and a mobile phone.

Also at dawn, the soldiers invaded Hebron city, and Beit Ummar town, in the southern part of the occupied West Bank, abducted three former political prisoners, confiscated cash and a car, during violent searches of homes and property.