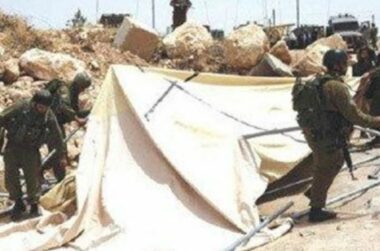 Israeli soldiers installed, on Tuesday evening, a tent, on the site of a former military base, which was built on Palestinian lands, south of the northern West Bank city of Jenin, and was removed twenty years ago.

Media sources in Jenin said the soldiers invaded the land of the former military base, removed a Palestinian farmer who was working on his land and installed a tent.

The move, similar to previous incidents, could lead to the re-establishment of the military base, or even a colonialist outpost.

The sources added that the soldiers also installed a military roadblock at Arraba town junction, south of Jenin, before stopping and searching dozens of cars, and interrogated many Palestinians while inspecting their ID cards.