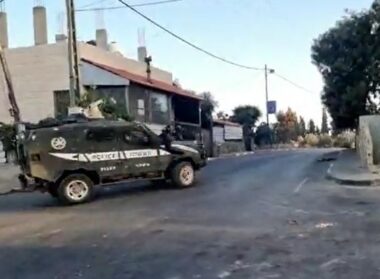 Local sources said the Palestinians were holding a nonviolent procession demanding the army to transfer the corpses of slain Palestinians back to their families, including Mohammad Abu Kafia, 36, who was killed when the soldiers shot him on September 24, after his car accidentally collided with an empty police vehicle near Nablus, in the northern part of the occupied West Bank.

They added that the army attacked the protesters with gas bombs and concussion grenades and chased many of them while trying to abduct them.

Several youngsters responded by hurling stones at the invading soldiers, and the army fired more gas bombs and concussion grenades.

In related news, the army invaded Rommana village, west of the northern West Bank city of Jenin, and installed a roadblock before the soldiers stopped, searched many cars, and interrogated the Palestinians while inspecting their ID cards.

Many army jeeps were also deployed near Zabbouba, Tayba, Ta’nak, and Aneen villages, west of Jenin.