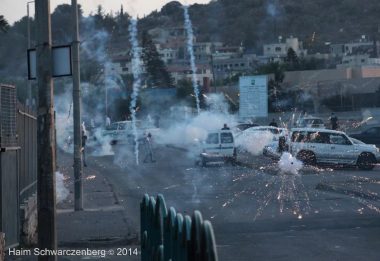 Several Israeli army jeeps invaded, on Tuesday evening, the village of Nabi Saleh, northwest of the central West Bank city of Ramallah, and clashed with many youngsters, who hurled stones on the army vehicles.

Media sources in Nabi Saleh said the clashes took place in the eastern area of the village, and that the soldiers used launchers, mounted on their jeeps, to fire dozens of gas bombs.

Despite the extensive gas fire, and rubber-coated steel bullets, the local youngsters managed to prevent the military from invading the center of the village, and the army withdrew later.

The soldiers also closed the Iron Gate, at the eastern entrance of the village, and installed roadblocks in the area, preventing the Palestinians from entering or leaving it.