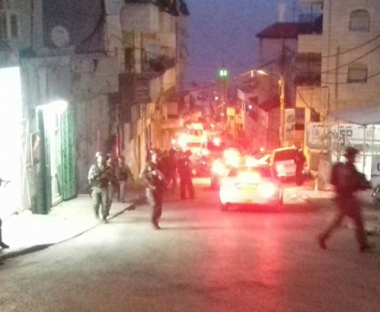 Dozens of Israeli soldiers invaded, on Tuesday evening, the al-Isawiya town, in occupied Jerusalem, and the northern West Bank city of Nablus, before attacking Palestinian protesters, wounding three,  and abducted three in the governorate, in addition to abducting one Palestinian in the al-Fawwar refugee camp, north of Hebron, in southern West Bank.

The invasion was carried out by at least 40 Israeli military jeeps and trucks, in addition to twelve buses, carrying around 500 colonists, while many Palestinians burnt tires, closed some roads, and hurled stones at the invading vehicles.

The soldiers fired many live rounds and gas bombs, especially in Amman Street, and the entrance of Balata refugee camp, next to the Tomb.

Medical sources said the soldiers shot three Palestinians with rubber-coated steel bullets, including Nidal al-Ka’bi, 16, who was shot in the head, before being rushed to Rafidia governmental hospital, in Nablus.

Furthermore, the soldiers abducted three Palestinians, from their homes, in Nablus city; one o them has been identified as Mahmoud at-Tabouq.

Furthermore, the soldiers invaded al-‘Isawiya town, in occupied East Jerusalem, and resorted to the excessive use of force against Palestinian protesters.

In related news, the soldiers abducted a young man, identified as Mohammad Ibrahim Ghatasha, from the al-Fawwar refugee camp, south of Hebron, after stopping him at a military roadblock, which was installed by the army on one of Hebron’s entrances, and moved him to an unknown destination.

According to initial reports, the army invaded several areas in the occupied West Bank, broke into and searched many homes, and abducted seventeen Palestinians.