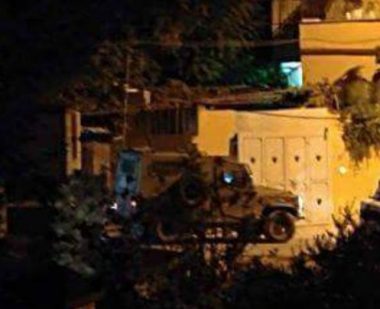 A large military force invaded, on Sunday evening, Beit Fajjar town, south of the West Bank city of Bethlehem, before surrounding and isolating it, reportedly after shots were fires at Migdal Oz nearby illegal colony.

The soldiers initiated extensive searches in Beit Fajjar, reportedly looking for a car that sped into the town after its occupants fired several live rounds at the colony.

Local sources in Beit Fajjar said the shot were fired at a concrete military observation tower.

The soldiers also invaded and searched a gas station in the area, and confiscated surveillance recordings.

Furthermore, the army placed concrete blocks on the western entrance of the town, completely shutting it down.

In addition, the dozens of soldiers were deployed around Beit Fajjar, before stopping and searching dozens of Palestinian cars, and interrogated many citizens, while inspecting their ID cards.