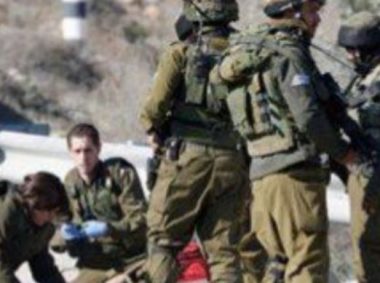 Earlier Friday, dozens of Israeli soldiers surrounded and isolated Kufur Qaddoum town, east of the northern West Bank city of Qalqilia, ahead of the weekly protest against the Annexation Wall and colonies.

The army stopped and searched dozens of cars, and interrogated many Palestinians, while inspecting their ID cards.

Morad Eshteiwi, the coordinator of the Popular Committee against the Annexation Wall and Colonies in Kufur Qaddoum, said the army is trying to prevent the Palestinians, along with Israeli and international peace activists, from marching.

He added that these military measures will not prevent the procession, adding that the protesters will practice their legal right, and will protest the decision of U.S. President Donald Trump, to recognize occupied Jerusalem as the unified capital on Israel, and the preparations for moving the U.S. Embassy from Tel Aviv to Jerusalem.

“Whatever measures Israel’s takes, and regardless of the siege and roadblocks, our protest will be held at noon,” Eshteiwi stated, “We will all voice our rejection to this immoral, hostile and illegal decision, and Trump’s support to this criminal occupation of our land.”