Israeli Soldiers Kidnap 15 Palestinians In Silwan And Al-‘Isawiyya, In Jerusalem 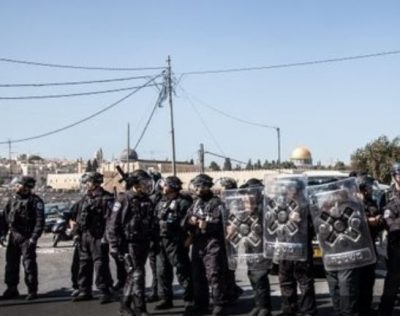 Israeli soldiers invaded, on Wednesday at dawn, the towns of Silwan and al-‘Isawiyya, in occupied East Jerusalem, searched homes and kidnapped thirteen Palestinians, before moving them to a number of detention and interrogation centers.

Lawyer Mohammad Mahmoud stated that the soldiers violently searched many homes in the two towns, interrogated many residents and kidnapped thirteen youngsters.

Mahmoud also stated that the Jerusalem District Court ordered a child, identified as Safeer Khamis Tahhan, who was recently detained by the army, under further interrogation, and set a hearing in the case of resident Mohammad Qroot on Thursday, and Khaled Mehles on October 28.

In addition, the District Court Judge in Jerusalem ordered the release of a young man, identified as Adam Sayyad, but ordered him under house arrest for seven days, and a 1500 Shekels fine.