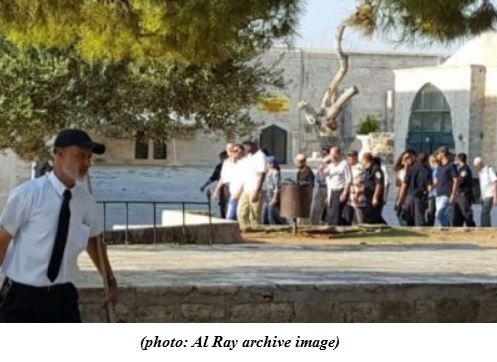 Around 200 Israeli extremists, on Tuesday, held provocative tours of Al-Aqsa Mosque, in annexed East Jerusalem’s Old City district, heeding calls by parent organizations to increase Jewish presence on the holy site during the Jewish holidays, according to mosque officials.

The Islamic Waqf, which runs the al-Haram al-Sharif (holy sanctuary) compound, the location of Al-Aqsa Mosque and the Dome of the Rock, said worshippers kept a close eye on the tour, to make sure there were no  illegal religious rituals performed on the site.

Beefed up police escorts kept a buffer zone between the Jewish and Muslim worshippers, to prevent any confrontations between them.

The Jewish groups claim, according to WAFA correspondence, that al-Haram al-Sharif is the location of the Jewish temples destroyed thousands of years ago, and call it the “Temple Mount”.

Muslims contest this claim and say that years of Jewish excavations under and around the holy site had never revealed any evidence of a Jewish temple at that location.

The United Nations Educational, Scientific and Cultural Organization (UNESCO) on Thursday voted in favor of a resolution condemning Israeli interference in the affairs of Al-Aqsa Mosque, which it recognized as a solely Muslim holy site.

In related news, PNN reports that Israeli forces, on Tuesday, broke into and closed down a local market in Hebron to allow Israeli settlers’ “safe” passage to the Ibrahimi Mosque.

According to a Palestine Information Center report, Israeli soldiers stormed, in large numbers, the local market and forced residents to leave the area before closing all commercial stores.

Israeli soldiers fired teargas bombs at the stores’ owners, causing a number of suffocation cases among them.

Israeli restrictions now pave the way for dozens of settlers from different illegal settlements to celebrate their holiday in the mosque.